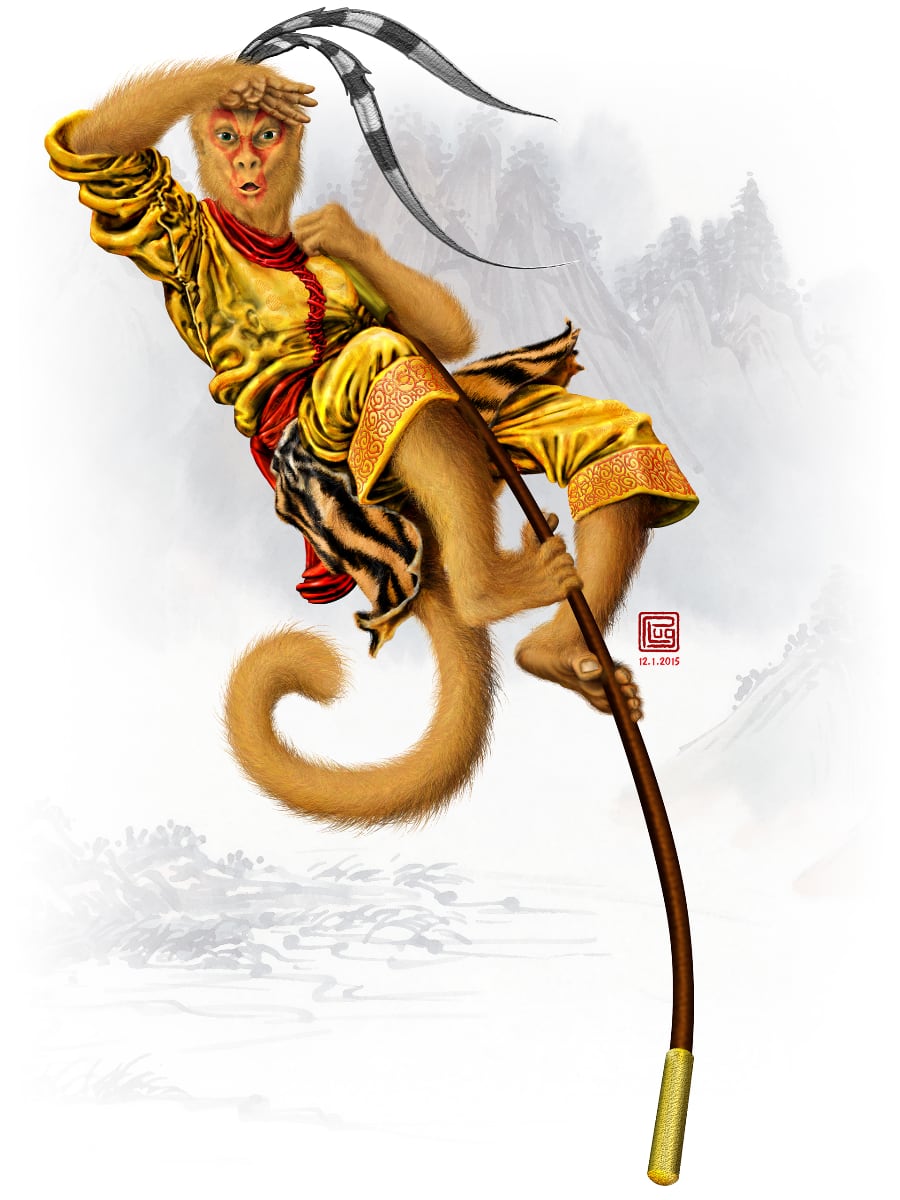 Humans see him and flee, uncertain of his monkey/humanoid appearance. He takes some clothes that were left out to dry, and continues on foot. His face hidden by a hood, he travels through towns and sees many examples of human degeneracy and vice. He continues on and into a forest. Eventually he is provided gifts by a dragon, Sun Wukong then acquires the Golden-banded staff Ruyi Jingu Bang/Ding Hai Shen Zhen (如意金箍棒/定海神针), the stabilizer of the Four Seas and a treasure of Ao Guang, the dragon-king of the Eastern Seas. The Monkey King is the only creature strong enough to wield the staff-like weapon, and there is an instant affinity between them. The Golden-banded staff can change its size, elongate, fly, and attack opponents according to its master’s will. It weighs 13,500 jīn or 7960 kg. When not wielding the weapon, the Monkey King shrinks it down to the size of a sewing needle and stores it in his ear.

In addition to taking the magical staff, the Monkey King encourages the Dragon King to gift him attire fit for a king. The Dragon King calls upon the other major Dragon Kings for assistance to source this for Sun Wukong, and they arrive and give Sun Wukong a golden chain mail shirt (鎖子黃金甲), a phoenix-feather cap (鳳翅紫金冠 Fèngchìzǐjinguān), and cloud-walking boots (藕絲步雲履 Ǒusībùyúnlǚ). The phoenix-feather cap was one of the treasures of the dragon kings, a circlet of red gold adorned with phoenix feathers. Traditionally it is depicted as a metal circlet with two striped feathers attached to the front, presumably the signature plumage of the Fenghuang or Chinese phoenix.

< What Is Humane Back to index Misery Angel >